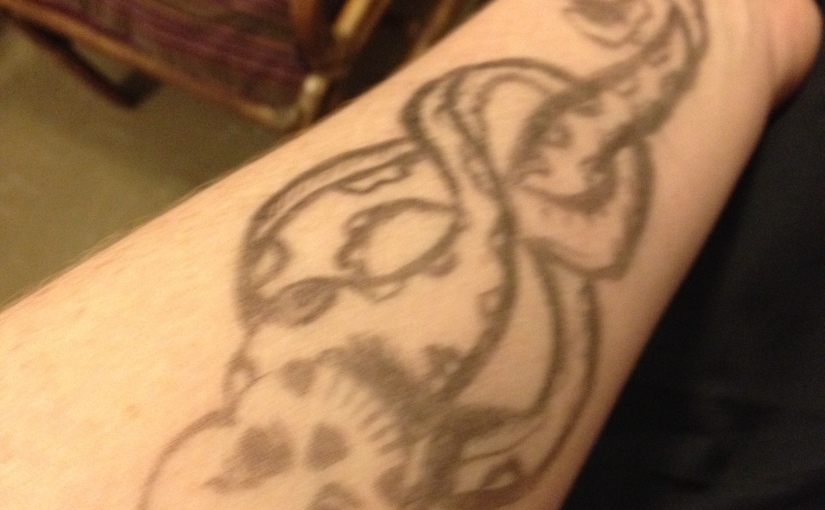 The photo above is not a tattoo. It was part of a costume that I wore one Halloween when I dressed up as a Deatheater. I painted it with body paint freehand early on in the day. I got some very suspect looks whilst I was walking around my local supermarket wearing my ordinary skirt, top and heels. Clearly, a tattoo of a skull and snake was not in keeping with that particular outfit. It did go much better with my ominous black cloak that I wore later in the evening. But on the inky front, I have two tattoos.

My first I got whilst on a seaside holiday when I was nineteen. I initially wanted a floral design on my hip, but the tattooist advised that having a tattoo on my hip would be very painful, so to go for a more fleshy area. So I went for the base of my back, nowhere close to the bone. And I decided on a new design, a little Chinese character meaning ‘friend’ (and have checked, it really does mean that!). This was before it was super on trend, not that it particularly mattered. When choosing to permanently mark my body, it is important for me to like what I am permanently marking it with! I still like it now, despite what everyone told me at the time.

My Mum was neither shocked nor horrified (though some of her friends were) when I got as she, as she put it ‘knows what I am like’. For many years after I flirted with the idea of a second tattoo, but could never find a design that appealed enough.

Wehn I was around thirty-six I found my design. I had not been looking for anything specific, but I was reading something about Eric Carle who is one of my favourite children’s authors. He wrote a book called ‘The Very Hungry Caterpillar’. He said that he wrote this book because he wanted children to know that there was always the possibility for change. This sentiment resonated with me massively. I had made some fairly major breakthroughs at the time, and suddenly, I knew what my tattoo would be. It would be the beautiful butterfly at the end.

If you have never read the book (and if you have not, I would definitely encourage!) then the butterfly at the end isn’t a traditional pretty symmetrical one, it is a glorious mismatch of colour and pattern. Within around two months from reading the quote, the butterfly now has a residence on my back. It took four hours, it was a lot of ink.

Both pieces of ink still make me gloriously happy. I have had negative comments. One from a lady in a sports changing room, asking me why I have a tattoo in a place that I cannot see. I explained that my back is a big canvas. She was relentless in her questioning (around five minutes, the time it took me to get changed), so much so she was making everyone else feel uncomfortable, but I answered her questions calmly. I guess she needed to vent that day and was disappointed by my lack of energised response. I also had a boyfriend who told me that it was like looking at scars and that I wasn’t to get any more, speak to anyone with or talk about my own, but that is worthy of a whole other blog. However, mostly I have had massively positive responses to my pretty ink, and this does make me happy. My choices for how I decorate my body are utterly my own.

Map Point. When have I felt compelled to change myself because of someone else?