I was recently asked by a friend why I am a vegetarian.  And I pondered. When I first became a vegetarian it was because I disagreed with how animals are treated in the factory farming system. This seemed to be straight forward enough, and before I became a vegetarian, I had already switched to free range and organic meats. But the logical step in my mind was then to eschew meat altogether. I still ate fish for a while (pescatarian) before embracing the full vegetarian diet.

Only I didn’t. A good few years previously, I had experienced the deep joy that is gastroenteritis and food poisoning in the same week. This left me with the marvellous dietary constrict of not being able to tolerate dairy, specifically anything that originated from point of cow. So my vegetarianism was a sort of cheese of sheep and goat (but not too much.. else pain and suffering issues forth!) and also eggs. Sometimes I don’t have dairy in any form, thus defining as an egg eating vegan (veggan). I fluctuate on these variables.

Then I watched a film called ‘Earthlings’. It took me two sittings to get through, as it was a muchly wet face experience for me, but it did endorse and inform what I already knew. So in essence, there are many good reasons why I eat as I do, and I appreciate that to some, my diet is difficult. But to me the answer of why didn’t really feel, well, answered, it felt as if there was more.

So I considered the aspect of entitlement. Did I feel entitled to profit from the suffering of other living things? I live in a built up society, I have a lot of stuff, and I know that a good deal of it, not just the food that I consume does derive from the sadness of others. And this is when the decisions in my life started to change, or rather that I noticed that a whole handful of decisions that I had been making all came under the same umbrella. I have been using charity shops and second-hand shops to source new clothing, trying to remember to take my reusable bags to the supermarket, buying ear buds made with a card middle rather than plastic, taking my reusable water bottle out with me, the list went on. It came down to respect for my environment.

When I realised this, suddenly other tasks that I had been struggling with became easier. If I have this inherent respect for my outside environment, then maybe I could start applying that to my house, my inside environment. Tidying up and streamlining my home is becoming easier, my attachment to things is lessening and this has been a most productive and also a kind of scary thing. If I had put all my love in the things around me, and I was letting go of these things, where would all that love go?

The answer was remarkably simple, I love me better.

Map Point. What sadness can I remove from my life? 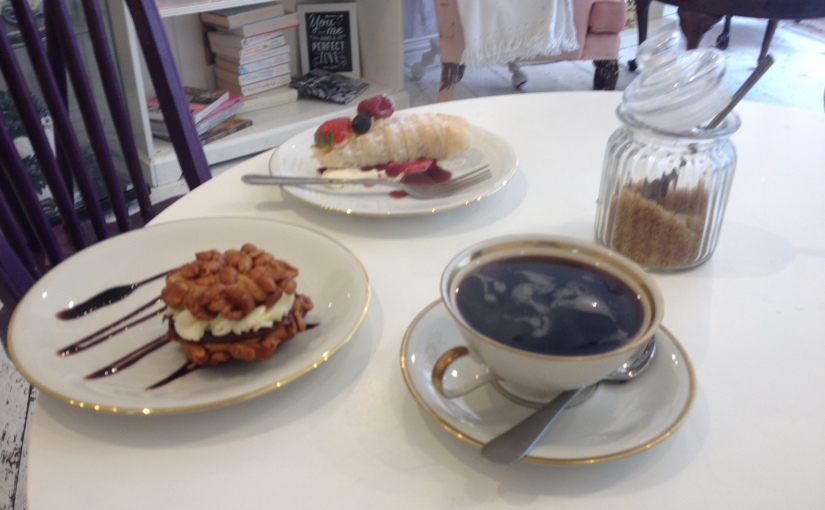 Food. I utterly love it, I have friends who say that they would happily just take a pill in place of eating, and although this could be exceptionally handy for the times that I forget to eat (more often than I would like, it leads to much hangry), as a way of life, I would find this incredibly depressing.

I find food exciting. From my rambunctiously spirulina green smoothies to roast dinner to pancakes with maple syrup (needs to be available for sale in bigger containers), it is all amazing. I love the variance in colours, the textures and the complete curiosity and joy about trying something new (the only thing I have ever had to remove from my mouth with speed was crab.. this was not an agreeable taste!). Food is a most sublime experience.

When I eat my dinner or drink something fruity, I find myself always savouring the last mouthful, like other people. I started to ponder this. Am sure that there are likely many good psychological rationales for why we do this, but I was thinking of it in terms of how much I love what I am consuming, why do I love the last bit most. Having happily drunk something delicious, it’s waiting for those last bits to dribble down that taste the best. Only in reality they don’t, there is seldom enough for a satisfying amount, so why is this a thing?

Maybe we don’t appreciate something until we can see an end to it. This also feels sort of bleak. Then I was thinking about a book that I was lent many years ago called ‘The Power of Now’ or something similar. In my process of consumption, I am racing, thinking ahead in my mind, about the finish, rather than enjoying the process. If every mouthful felt like the last one, I think that would be a truly divine way to experience food.

Learning to take my time, learning patience is a skill that I often lack. Maybe I have never seen any value in it, or maybe my requirement to know outcomes leads me to not appreciate the journey. Being goal motivated is a good thing, in many different ways, but it does not directly foster appreciation. So, my new aspiration, my new goal is to learn to take my time over things, and maybe (just maybe), I might be able to leave the last mouthful on the plate.

Map Point. Where can I invest more time?